Dennis is also the recipient of two Emmys, a Parent's Choice Award, and a Telly. You can hear his work on television, radio, audio books, home videos, and stage productions such as "Clifford the Big Red Dog," "Sesame Street Live" and "The Magic School Bus."

Dennis began his entertainment career at the age of 7 as an actor on Broadway. As an adult, he toured with the New Christy Minstrels (playing upright bass and singing). His novelty tune "Captain Kirk's Disco Trek" led to his first serious foray into children's music and a Grammy for "Sesame Country." He has had nonstop assignments since then.

Dennis has served a music director for several children's TV shows including the PBS series "Noddy" and, most recently, "BJ's Teddy Bear Club" which airs on TBN and just earned him his second Emmy award. His album, "Songs From the Neighborhood - the Music of Mister Rogers" won last year's Grammy award as Best Musical Recording for Children. 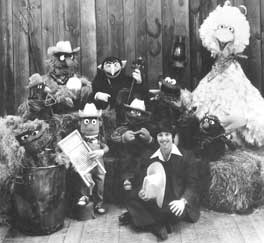 Recently Dennis fulfilled his own childhood dream by spearheading a Beatles tribute band called The WannaBeatles. The band has grown in popularity and was even nominated for a Grammy in the spoken word category for an audiobook collection of interviews with Beatles fans called, "Fab Fan Memories - The Beatles Bond."

When your childhood heroes are people like Danny Kaye, Jack Benny and Jerry Lewis, you can't help but have a silly side to you. Creating and producing music, particularly children's music, allows me to be as silly and creative as I want to be. And playing in a Beatles band makes me feel like a rock star. "Now that's my kind of job description!"